skip to main | skip to sidebar

I needed to solder a USB jack back onto a printed circuit board in a printer the other day. I'm more comfortable soldering big ol' resistors and tube sockets in antique radios, and my gigundo Weller soldering gun which has served me so well for decades looked just a little too big for the job. Well, actually a lot too big; the Weller tip would have covered both traces on the board at once! I have several soldering irons too, but each of these also dates back to the day of large, dicrete components and wasn't going to be any more useful here.

So I figured it's time to buy a new, small soldering iron for delicate work. Most folks seem to recommend a 30 watt iron for small work. I found a fifteen watt soldering iron at Radio Shack that seemed like it might be just the thing for dealing with smaller parts in computers, transistor radios and the like.

I worried that it might be too small, but it was perfect for dealing with these tiny parts and wires. For

only nine bucks, it seems like a great deal. It's got a grounded tip too, which is probably a good thing when dealing with static sensitive chips (and maybe not so good a think when dealing with AC/DC AA5 radios that are still plugged it! :-)
Posted by Dave Sica at 9:07 PM No comments: 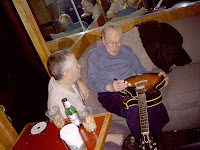 Today we lost Les Paul. Les was an inventor and musician and wove those two talents together in a remarkable way. I had the good fortune to spend some time with Les a while back as part of an InfoAge project. Besides being an innovator, one of the most famous guitarists in history, and someone who people like Paul McCartney held in awe, Les was also a "regular guy" who, somewhat incredibly, would actually take my telephone calls! I only regret that although he had agreed that it would be great fun to reprise his disc-based sound-on-sound multitrack setup at a New Jersey Antique Radio Club meeting we never got to do it.

Listen to Les Paul's Music
Posted by Dave Sica at 12:38 PM No comments:

I just finished reading a biography of William Shockley. Broken Genius was published in 2006 and author Joel Shurkin has gone to extraordinary efforts to dig deep behind the superficial sanitized history of the invention of the transistor that many of us may be familiar with.

In Broken Genius, he also covers Shockley's, well, shocking slide into racism and self destruction. None of this was sugar-coated either nor was Shockly blindly condemned for his views as many have done whether through personal conviction or political correctness. While Shurkin was careful not to be an apologist for Shockley's behavior, neither did he shirk from documenting the instances where some of Shockley's "abhorrent" racial theories later actually became part of mainstream science.

I picked this book up primarily to read about the story of the invention of the transistor and the man behind that effort. The story of Shockley's later-in-life delve into eugenics (or dysgenics as he referred to his theories) proved to be an unexpected eye-opener, both from the point of view of the story of his racist views and even more so that some of the ideas for which he was condemned have since been accepted and put into practice for the benefit of mankind!

Even the story behind the transistor wasn't what you might have been told. I already knew that this, certainly one of the most - if not the most - important invention of the twentieth century wasn't simply a lucky accident. Bell Labs scientists knew enough about semiconductor crystal theory prior to 1947 that they predicted that a solid state amplifier could be developed. A massive corporate research lab effort ensued to use that knowledge to develop that prize, the transistor, that they knew had to be possible. But the politicking, the infighting and the intrigue behind the public story, as dug out by the author, was fascinating both for the added dimension and drama it gave to this story and because it went to show that "the more things change the more they remain the same" - the same type of professional jealousy, petty rivalries and bad behavior that we condem today was just as present in the 1940s.

Perhaps most surprising to me was the story about how Shockley might not have been included in the Nobel Prize nomination. It was politics, with a dose of common sense that kept him included. Why? Well, who invented the transistor? Shockley, Bardeen and Brattain. We all know that. And in one sense it's true. But although Shockley supervised the group, Bardeen and Brattain did all the practical development work. And -- this was news to me -- Shockley's name does not appear on the patent, a fact that literally drove him to distraction!

Virtually every company in Silicon Valley -- the entire microcomputer universe -- is descended from Bill Shockley's first company Shockley Semiconductor. It was a collosal failure, due primarily to the rigidness of his scientific beliefs and his inability to manage his employees. But it was ground zero for all the electronic miracles that have been developed since.

Broken Genius is a gripping story about a genuine genius who came from a dysfunctional family, who alienated virtually all those he came in contact with and whose own children only found out about his death in the newspapers. A sad story for the most part, except for the legacy he left us in his inventions.
Posted by Dave Sica at 7:59 PM 1 comment:

Stan Lebar has a lot of interesting things to say

Published a nice video interview with Stan Lebar, the guy in charge of developing the TV camera that sent us those live pictures of man's first steps on the moon. It's available at The Internet Archive.
Posted by Dave Sica at 2:12 PM No comments:

Well, here goes the new blog. And what better time to begin this project than today?

Today is the 153rd anniversay of the birth of Nikola Tesla. I've always been charmed by the man. Just now, I've been reading again about the "Current Wars" in the book "Empires of Light," another telling of the Tesla/Edison rivalry. It never ceases to amaze me what this guy was able to think up over a hundred years ago. I have to wonder if some of Tesla's unfulfilled dreams - like wireless transmission of power - might come to pass with all the advances in technology since then.
Posted by Dave Sica at 9:20 PM No comments:

Well, I've decided to start writing a blog. I think that you should too. Why? Well, I suspect that most of the thoughts that I might express here will be pretty mundane. Yours too, in all liklihood. But I'm pretty sure it would be interesting to see what we all think about the things we find interesting enough to think about and write about.
Posted by Dave Sica at 9:11 PM No comments: